The Paths We Walk: ‘Landlines’ by Raynor Winn – Stranger than Fiction, #NonFicNov Week 3

This week as part of Nonfiction November, the prompt is Stranger Than Fiction.  For this prompt I have chosen to look at Raynor Winn’s third book Landlines.

“These paths that cross our land take human energy and imprint it on the earth, connecting us to it, leaving both the land and the human changed by that connection.    Thousands of feet over thousands of years have trodden many of the same trails we have, tracing their passage onto the landscape, imprinting their memories onto the soil.  What remains are not just paths, they’re precious landlines that connect us to the earth, to our past, and to each other.”

Week 3 of Nonfiction November is Hosted by Christopher at Plucked from the Stacks it is a look at those nonfiction books that almost don’t seem real! 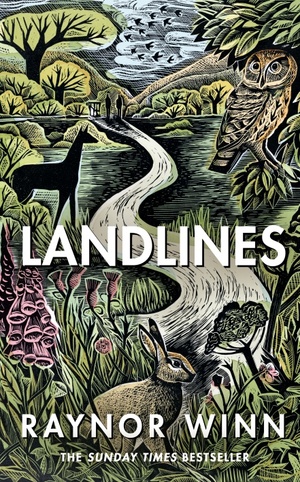 Moth has been diagnosed with a terminal illness.  The most the doctors seem to be able to say to him is don’t tire yourself and be careful on the stairs.  They don’t mention anything about taking a 1000 mile walk.   Despite great improvements in his health during their last trail walk – 600 miles of the South West Coast path – which Winn wrote about in her first book The Salt Path –   a more sedentary lifestyle upon their return has led to a deterioration in her husband’s health .

Moth takes a fall in the orchard and is obviously very ill.   They discuss whether he is well enough to walk to the local Church and back, a distance of a couple of miles.  It is tempting to think that under these circumstances,  wisdom would not be to suddenly decide to walk from one end of the country to the other, especially at a time when the country was only just beginning to emerge from covid lockdowns and many facilities were still closed.  Most people would stay home.  Perhaps most people would be wrong.  There is only one way to find out.

In some respects of course life has changed for Raynor and Moth. She does have three best selling books under her belt and people recognise her on the walk.  She even gets her own book recommended to her by other walkers!  ‘Have you read The Salt Path?  That’s the only reason we’re here.’   But in some respects nothing has changed.  The illness has not gone away.  In her heart she knows she is faced with a long, lonely future unless this one last gamble pays off.

Winn is still scarred by the experience of homelessness:

From a mysterious dark haired woman that appears near a ruined homestead in a deserted highland glen,

“I know only too well the aching sense of loss and fear that family might have felt as they left their home for the last time, probably to head into an unknown future…”

to a pizza restaurant in Manchester that refuses them entry on account of their scruffy appearance and rucksacks, a frosty reception they became accustomed to during their homelessness time.

The walking continues because although it seems an overwhelming crazy thing to do, there is an outside chance that  it worked once before, it might work again.  This is what I find so respectworthy  – the refusal to be beaten.  At the same time what they did is so unlikely that if this were fiction I would have put it aside as completely unlikely.  That’s the great thing about the power of the human soul though.

I don’t know what genre Winn’s books fall into.  They are not strictly travelogues, nor one hundred percent biographical (is anything?) although with elements of both those things. Into the mix goes environmental campaigning and a deep love of landscape.     She is not perhaps a naturalist in the strict sense like Robert Macfarlane or Helen Macdonald, but it doesn’t matter.  Winn is clearly passionate about the land through which they pass and which is vanishing before our eyes, together with most of its inhabitants, except the human ones.  There is an immediacy to her writing coupled with a deep common sense, and I mean that in the original way.  A sense of commonality, of connection.

On visiting Flodden Fields, the site of a 16th century battle between the Scots and English which left thousands dead and which still has an uncanny atmosphere, the author writes:

“Since the sixteenth century humans have changed the world beyond recognition. We’ve revolutionised the way we live; made breathtaking and miraculous discoveries and yet we seem totally incapable of changing ourselves.  We haven’t evolved a step beyond that day in 1513 which saw so many people die.”

This is an idea deeply resonant with mahayana buddhism and the teachings of Daisaku Ikeda on the human revolution.  We can change individually, but we haven’t yet.

There are some parts of the story that don’t quite add up.  For example a couple of bicycles appear around Shropshire and then vanish off on a truck somewhere.  Sometimes they find places to stay, sometimes they camp.  But outside of Scotland wild camping is illegal so perhaps they busk it.  What is beyond doubt is that Winn is becoming a very influential writer and trail walks will probably resound with thousands of extra pairs of boots next year..

I have no idea if anyone has measured The Salt Path effect but I wouldn’t be surprised if thousands of people  will be taking to the country’s national trails who might not normally choose to do this.   Even Mr. Rune and I are thinking of taking to the hills next Spring.  We have done sections of paths before but not…er… 1000 miles.  The prospect of a walk like that – especially when you’re ill – leaves my jaw thoroughly dropping on the floor.

I am perhaps a little underwhelmed by the title Winn has chosen.  Landlines sound more like something that might have been written by BT Openreach.  I would gave preferred ‘Leylines’ or something a bit more romantic.  After all if you are prepared to walk thousands of miles in ill fitting boots, at the same time as being worried sick about your husband, at the same time as having the pressure  to produce manuscripts of the whole thing to a publisher,  then that is a fairly romantic thing to do.

These ideas of walking, landscape, memory and connections are not new . Poets and writers and artists have been treading that path time out of mind.   Robert Macfarlane writes in The Old Ways (Hamish Hamilton, 2012)

“The literature of wayfaring is long, existing as poems, songs, stories, treatises and route guides, maps, novels and essays.  The compact between writing and walking is almost as old as literature.”

Almost as old as love.

12 responses to “The Paths We Walk: ‘Landlines’ by Raynor Winn – Stranger than Fiction, #NonFicNov Week 3”