Solitude, Pain and The Pursuit of Love: The Lives of Two Poets

If ever you are feeling a bit oppressed, hard done by or lonely I can recommend – if you can get hold of a copy – Iris Origo’s book A Study in Solitude.  The Life of Leopardi: Poet Romantic and Radical (Pushkin Press, 2017).  After reading of the life of this poor young man you will realise you are better off than you thought!

What was so difficult about his life?  In a word, family.  Not his siblings, they suffered as much as he did – but his parents.  Especially his mother.

Giacomo Leopardi was born 29th June 1798 in a hilltop village called Recanati, Italy, to an impoverished if noble family who lived in an impoverished but noble palazzo, called not unreasonably, Palazzo Leopardi.   His father was one Conte Monaldo.   But his mother.  Goodness me, his mother!  Contessa Adelaide.  She was a religious zealot who reduced her entire family to depths of misery with her parsimony and obsessive control, all apparently carried out in the name of Catholicism.

Adelaide was a woman who believed that beauty in a child could not be the divine will and that children should therefore be ugly.  Also the Contessa felt the death of a child was something to celebrate (she herself lost seven out of 12 children) and that a departed child had ‘flown to heaven’ while additionally saving its parents the trouble of its upbringing.  If Contessa Adelaide loved her children at all, and who knows, it was never shown.

“This unceasing parental control, this semi-divine parental omnipresence, strikes the reader of today with a sense of unbearable oppression.”

Agreed.  Such oppression indeed that Giacomo wrote in his diary years later in one of the saddest testaments anyone could write about their own life,  that no man would: “…accept to return to childhood, if he had again to suffer what he suffered then.”

Kept prisoner in his own home.  Giacomo  was aged over 20 before he was allowed to leave the house on his own.   Even as an adult his parents would open his letters and ceaselessly interfere in every aspect of his life including who he would be allowed to see or visit.  The poet’s sister Paolina fared even worse, since she failed to marry and had not Giacomo’s poetic or intellectual gifts.  She had to wait until she was aged 50, when her mother died, in order to be able to leave the house without a chaperone. One of Giacomo’s brothers managed to run away to marry and live with his bride’s family.

But Leopardi had one advantage in his family situation which he made great use of – his father owned an excellent library of books, wherein between the years of 1812 and 1817 the young Giacomo succeeded in teaching himself the classics, Greek, philosophy and of course poetry.  Under the guidance of certain tutors but mostly by his own hand, the genius that would become Giacomo Leopardi slowly and painfully took shape.

For the moment, let us leave this poor youth, unloved, friendless,   bent over his books in the shadowy library with its impassive marble busts staring down at him in Palazzo Leopardi.  Let us leave too the bitter Tramontana wind howling beyond the window.

In the more equable climate of Venice in April 1819 we may find another poet.  Here in fair Venice where we lay this bit of our tale, a beautiful young man – the one they called l’Anglico Mylord – is currently living.  A gifted and famous English poet he has, outwardly, never known any of the sufferings of our poor Leopardi for he is much  wealthier,  more beautiful and a great deal more accustomed to love.  Inwardly? Who knows.  He is shortly about to get himself into an entanglement that will cause a certain amount of difficulties for a lot of people.

This evening, Lord Byron is discreetly yawning his way through a fashionable ‘conversazione’ at Casa Benzoni.    He  allows himself to be introduced to a beautiful lady,  Teresa Guiccioli Gamba, 18 years old and recently wed to a man three times her age.  She takes one look at Byron and the stage is set for one of the great love affairs of the century. 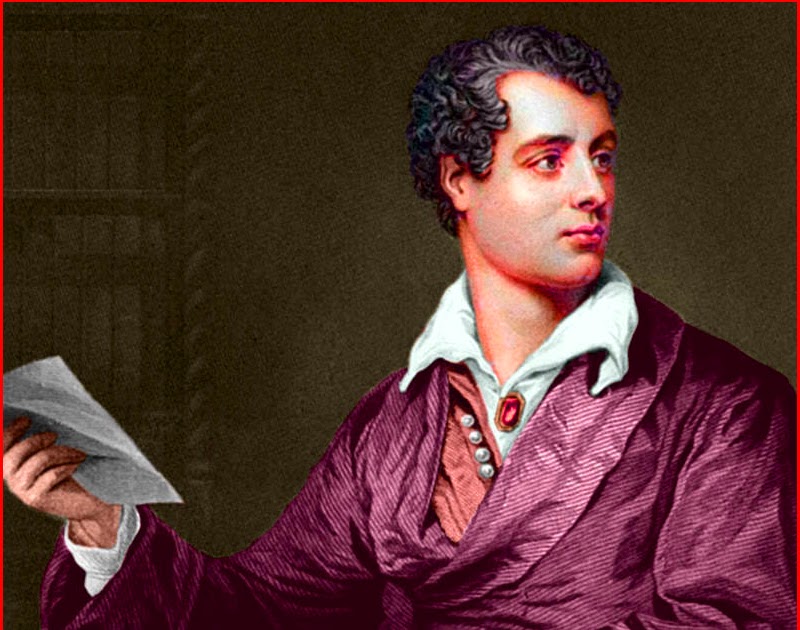 Leopardi never got the chance to have a love affair.  He wrote a few poems for a woman called Sylvia that he barely even met.   He dreamed and wrote poetry about a few others; they never returned or even knew about his devotion.  In comparison, Lord Byron had countless renowned affairs such that it is a wonder he had time to write anything.  His affair with Teresa Guiccoli Gamba caused such ructions in Italy that the Pope himself intervened to grant her a divorce from her husband and her family were exiled by the Papal States and fled from Ravenna to Pisa.

Leopardi was desperately poor all his life, Byron was titled, rich.  Interestingly though, their politics were not miles apart. but both men suffered personal and professional setbacks as a result of their perceived ‘liberal’ views.

Byron and Leopardi never met but seemed to circle around each other in Italy.  When Leopardi finally escaped Recanati and travelled to Pisa he was five years too late to have witnessed Lord Byron :

“… installed in the piano nobile of the Palazzo Lanfranchi, with his mistress and her brother, his bulldog Moretto, and a cage containing four white geese; while Leigh Hunt his Marianne and their gaggle of spoiled children…occupied the ground floor.”

Had the two poets met, would they have found any common ground?  Origo thinks not.  Byron, she believes, would have appeared too outlandish for Leopardi’s conservative tastes; that the differences between the Latin and Anglo-Saxon character would have presented insuperable barriers.    No doubt this is all true.  Although I cannot help but think that Byron might have recognised the despair in Leopardi’s soul.  And shared it.

I have been happy to recently read these two books about two poets, both epoch creating in terms of their poetry but endlessly challenged in their personal lives although for very different reasons.

Origo was a British born biographer and writer.  Born Iris Cutting to a wealthy anglo-Irish- American family she grew up among that exclusive New York set about whom Edith Wharton (a contemporary) wrote The Age of Innocence .

Iris had one set of grandparents living on Long Island while the Irish branch – her grandfather was Lord Desart –  lived in a castle in Ireland. I think there was a Scottish castle somewhere too.    She married an Italian nobleman lived in Italy and devoted much of her life to the improvement of the Tuscan estate at La Foce which she purchased with her husband in the 1920s. Her diaries and Memoirs War in Val d’Orcia and Images and Shadows are published by Pushkin Press who also publish Last Attachment, the Story of Byron and Teresa Guiccioli.

A Study in Solitude : The Life of Leopardi, Poet,  Romantic and Radical is out of print.

2 responses to “Solitude, Pain and The Pursuit of Love: The Lives of Two Poets”