A Mysterious Game with High Stakes; Shades of Pullman and Clarke – The Betrayals by Bridget Collins, A Review

This is Bridget Collins second book for adults.  Her first was The Binding which I reviewed here, a book of magic, memory and forgetting.  The Betrayals is less Dickensian than her earlier book – or is it.  That itself could be an essay title.  The Betrayals is Less Dickensian than The Binding.  Discuss.    The narrative takes place in a school called Montverre where scholars devote themselves to a mysterious game known as the grand jeu. This felt pure Potter.  The word ‘Magister’ which appears later is pure Philip Pullman.  The  very first sentence of this book seems to ring with Susannah Clarke’s Piranesi:

Collins starts her book:  ‘Tonight the moonlight  makes the floor of the Great Hall into a game board, every high window casts a bright lattice … ’

Clarke’s book starts: “When the Moon rose in the Third Northern Hall I went to the Ninth Vestibule to witness the joining of the three Tides. 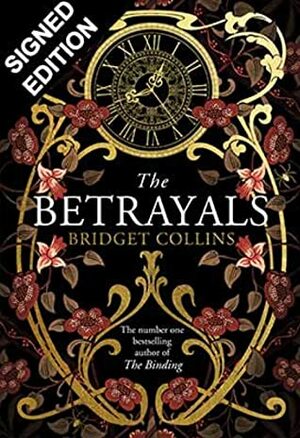 But Collins very much forges her own path. Pullman did not invent the word magister – Latin for ‘master ‘  any more that Jo Rowling invented schools with great halls and arched beams in the ceilings.

The Betrayals is a fantasy that somehow isn’t a fantasy, set in the medieval buildings of a grand and ancient ancient school called Montverre, against a sinister background of persecution of those who profess the Christian faith and an interfering government which has just passed a new ‘Purity Law’. The author acknowledges the influence of Hermann Hesse’s The Glass Bead Game, in her descriptions of the grand jeu.

What do we learn about the grand jeu? We only know it is an arcane and mysterious tradition which scholars aspire to learn: it involves music, maths, philosophy, literature, a combination of many disciplines.  There are no descriptions of the grand jeu – although hundreds of pages of the book are devoted to discussions of it, to studying it, to competitions, to the winning  and the losing of a game.  Entire careers are forged, and lost.  Some people are very good at the game, or were very good at the game during their scholarship days at Montverre.  Such a one is our narrator, Leo Martin, who once won a gold medal before going on to a career in politics and rising to ministerial position from which he is being ignominiously sacked when we meet him at the start of the story.  Leo has – or had while at school –  a friend called Carfax, a blonde, highly intellectual misfit who seemed to me to be one teddy bear short of Sebastian Flyte.

It’s a short distance from a game to a betrayal, when the stakes are high enough.   The government with its odious ‘purity laws’ are searching for control and scapegoats  and their warped gaze falls upon the ancient spires of Montverre.  How better to control the minds of upcoming generations?  Some of the magisters will try to pretend that all the rubbish that’s happening around them is ok, they want to keep their jobs;  some will fight back against the grand jeu becoming politicised.  Who will win in the end?

I did very much enjoy this closely plotted story and highly recommend it.  My only quibble is that some of the relationships between the characters felt a bit unconvincing, particularly so as the story draws to a close.  Also the ‘baddy’ is duly sinister and evil but Collins does pile it on a bit with one or two of the plot reveals!

Another quibble – the writing style.  Very often the characters don’t get to finish their sentences:

‘We don’t take guests of any kind, let alone…’

‘Surely we have an obligation to..’

Yes I know we all do it and this is straight from the ‘dialogue tips and tricks’ playbook.  People don’t always finish  sentences in reality.  But it very quickly becomes frustrating on the page if there is too much of it.

I don’t know whether anyone else agrees with me on that?

4 responses to “A Mysterious Game with High Stakes; Shades of Pullman and Clarke – The Betrayals by Bridget Collins, A Review”