Fiction/Nonfiction Book Pairing : This week, pair up a nonfiction book with a fiction title. It can be a “If you loved this book, read this!” or just two titles that you think would go well together. Maybe it’s a historical novel and you’d like to get the real history by reading a nonfiction version of the story.

I find this one a little tricky.  But being the daughter and grand-daughter of refugees, I have decided to go with the theme of refugees.

My nonfiction choice is ‘Sea Prayer’ by Khaled Hosseini author of The Kite Runner and And The Mountains Echoed.  Hosseini is a Goodwill Ambassador for UNHCR, the UN refugee Agency. 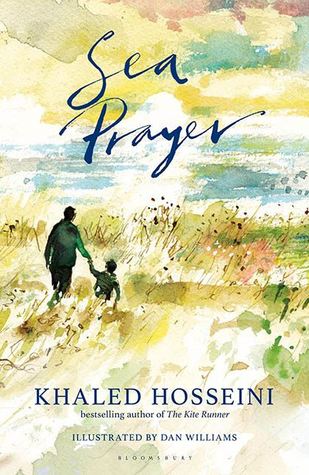 This wonderful  little book – illustrated by Dan Williams –  is  styled as a story being told by a father to his son of his memories of Syria.

“I wish you hadn’t been so young.

You wouldn’t have forgotten the farmhouse

the soot of its stone walls,

the creek where your uncles and I built a thousand boyhood dams.”

Inspired at it was by the shattering images of the death of Alan Kurdi,  a three year old Syrian boy who died in 2015 with his mother and brother trying to cross the Mediterranean in a dingy. Trying to reach safety.  In the year after Alan’s death, 4,176 others died or went missing attempting similar journeys.  Therefore to me,  Sea Prayer is not fiction, but fact.

“Afghans and Somalis and Iraqis and

All of us impatient for sunrise,

all of us in dread of it.

All of us in search of home.”

I am pairing Sea Prayer with The Stray Cats of Homs by Eva Nour translated from Arabic by Agnes Broome.  This is the story of Sami,  a young man in search of home, although he has not left his home city of Homs in Syria. He refuses to leave home even as his family pleads with him to go with them, even as his home and his whole city succumb to the devastation  of war. Conscripted into the military to fight against his own people, still he does not give up hope.  When I wrote my review for this blog, I said:

“The streets where he lived and attended school are reduced to white dust and rubble. Food becomes difficult to find, then impossible. Gradually his friends leave if they are able or some are killed either in the fighting or just because. Sami starts to photograph the war, still believing that someone will care about these blatant abuses of human rights, this devastation by Assad’s forces of his own people.”

These books are about Syria and yet they are not about Syria.  They address themselves to all the forcibly displaced peoples of the world, and they act as a prayer for peace.