Empire of Pain: The Secret History of the Sackler Dynasty, Patrick Radden Keefe

In 2012, in an interview with The Wall Street Journal a Dr. Russell Portenoy said:  “the reality is that data about the effectiveness of opioids does not exist.”

By the time this statement is made opioids have killed more Americans than did the 2nd world war and the most widely known, most abused and ultimately most notorious of these, a drug called OxyContin, will have made billions for Purdue Pharma and its dynastic owners, the Sackler family.

This drug – basically heroine in pill form – had originally been developed to treat chronic cancer pain.   But Purdue pushed the FDA (responsible for authorising new drugs in the US) to licence its use as a general painkiller.    Due to the pill’s special coating which the company claimed had slow release properties there was, so they said,  no likelihood that patients would  experience ‘the immediate rush of instant release drug’ and therefore the product carried little risk of addiction.    In its packaging insert the company claimed –:  “Delayed absorption as provided by OxyContin tablets is believed to reduce abuse liability to the drug.”

Is believed?  Remember that term. That ‘is believed’ is important.  It was memorised by the sales reps whom Purdue employed in their hundreds and sent out into the field to parrot in surgeries where ‘is believed’ became a mantra.  Later no-one quite remembered who had written that ‘is believed’.  Curtis Wright – at that crucial time head of the FDA said he had ‘no specific memory of doing so’.  Why was a man who had oversight of the pharmaceutical industry involved in any way in the promotion of it? 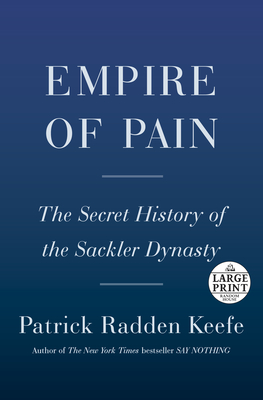 On December 28 1995 the FDA approved OxyContin.   Within a year, Curtis Wright had left his job with federal government and moved to a new position at Purdue Pharma  ‘with a first year compensation package of nearly $400,000’.

Wind back to 1949, the Brooklyn firm of Charles Pfizer & Company (yes, that Pfizer) was enlisted by the US military to help produce large quantitites of the new miracle antibiotic drug penicillin to administer to the troops.  Pfizer developed Terramycin and they wanted to market it aggressively to hospitals and wholesalers.  The man they chose to undertake this campaign for them – who told them he would make Terramycin a household name – was a not-quite-thirty-years-old Doctor called Arthur Sackler.  Sackler went on to revolutionise medical advertising by using teams of sales representatives who sold directly to doctors.   Terramycin became a huge success.  He later went on to do the same for Librium and Valium and by that time he had made his fortune.

Arthur had been born in the US the son of Jewish immigrants from Poland and Galicia.  A small pharmaceutical company called  Purdue Frederik (later Purdue Pharma) was a company that Arthur had bought for his two brothers, Raymond and Mortimer.   Arthur was never involved in OxyContin, by the time Purdue developed this drug he had already died, but it was this drug that took the company from a small outfit selling constipation medication to a multi-billion dollar business.

The problem was that OxyContin was massively successful and massively addictive.  Despite ample evidence of this (provided by external investigations) the company denied this. Yet they never undertook any of their own investigations it seems or at least turned a blind eye to the statistics, claiming that there were always people who would abuse drugs and it was nothing to do with them.

The Sacklers, they said, had done nothing wrong.  The drug just kept selling and selling and selling.  Doctors kept prescribing.  They were actively encouraged to do so long after the law suits started rolling in the Sackler family stuck their heads in the sand and drew billions from the company.   Purdue was never a public company, from first to last it was owned by the family.

In 2001, Shortly after  Rudolph Giuliani stepped down from his position as Mayor of New York City, he went into business as a consultant.   And one of his first clients was Purdue.  By this time, the family was trying to frame widespread abuse of OxyContin as a law enforcement problem, rather than an issue with the drug itself or the way that it was marketed.

After a five year investigation In 2007 after the company – or three of its executives – had pleaded guilty to felonious ‘mis-marketing’ of OxyContin paid a $600 million  fine.  No criminal charges were brought. A couple of executives fell on their swords, the drugs continued to sell, continued to be abused. the OxyContin express seemed unstoppable.

Here is what the Guardian reviewer wrote in May ’21:

The things they knew! They knew that OxyContin was more potent than morphine, and they exploited the fact that doctors thought the reverse to be true. (“It is important that we be careful not to change the perception of physicians,” a Purdue official advised.) They claimed OxyContin posed little risk of addiction, even though Purdue had carried out no tests to that effect at all. They knew they were using flimsy literature to reassure physicians about OxyContin’s safety: “not a peer-reviewed study,” Keefe writes, “but a five-sentence letter to the editor by two doctors at Boston University”. They knew the drug could be injected, but they didn’t let on. They argued that OxyContin’s slow-release mechanism was a barrier to abuse, but they knew they also owned another company that made immediate-release oxycodone. Studying their sales data, they maintained a secret list of doctors who overprescribed OxyContin – and did little to alert the authorities to these pill mills, preferring to grow rich off the proceeds instead.

The company’s fantastic wealth had become sanitised by their massive art collections, and foundations.  There are (or were) Sackler Wings, Sackler Galleries, Sackler Foundations all over Europe and America, but that too was about to change.   In 2018,  activists led by Nan Goldin walked into the Guggenheim Museum in New York and staged a ‘die-in’ (tactics that would later be emulated by Extinction Rebellion and other groups in respect of fossil fuel funding of the arts). It was time, the activists said, to call time on art foundations turning the other cheek to the source of their donations.

The story of the spectacular rise and fall of the Sackler Dynasty is told with great panache by Radden Keefe.  It runs to 450 highly readable pages and is minutely researched, the notes, notes on sources and index themselves take up almost 80 pages.   No members of the Sackler family co-operated with the author’s efforts or agreed to be interviewed.

The story is taken right up to the 2020 pandemic.  And what a story it is.   I was so shocked by some of the things that I read in this book that I kept reading bits out to Mr. Rune!  Listen to this!  You won’t believe this!

And that is exactly the trouble, no-one did believe it. OxyContin cut a swathe through the US for 20 years.   By then  it was too late to stop the opioid scandal which continues to worsen to this day – given the added stress and isolation of the pandemic.  Too late to stop hundreds of thousands of people needlessly dying.

7 responses to “Empire of Pain: The Secret History of the Sackler Dynasty, Patrick Radden Keefe”