Thank you to She Reads Novels where I found this one. 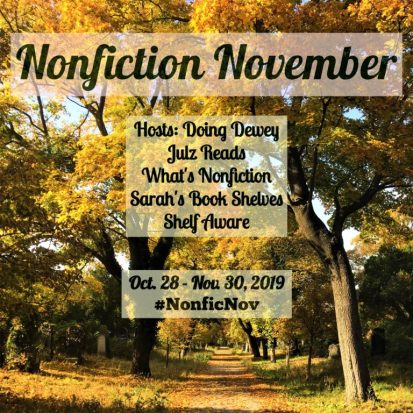 Thank you  to the hosts for 2019 – Katie of Doing Dewey, Julz of Julz Reads, Rennie of What’s Nonfiction, Sarah of Sarah’s Book Shelves, and Leann of Shelf Aware.This event runs for five weeks, with five weekly discussion topics, giving us a chance to highlight and talk about our non-fiction reads.

Take a look back at your year of nonfiction and reflect on the following questions – What was your favorite nonfiction read of the year? Do you have a particular topic you’ve been attracted to more this year? What nonfiction book have you recommended the most? What are you hoping to get out of participating in Nonfiction November?

Here are my non-fiction reviews for 2019 – seven so far, including two writerly memoires.  I say ‘so far’ in the falsely optimistic hope that the year doesn’t have much more than two months to run and the pile of books TBR is undiminishing.

Crete: The Battle and the Resistance by Antony Beevor

A Woman of No Importance by Sonia Purnell

Heida: A Shepherd at the Edge of the World, by Steinunn Sigurdardottir and Heida Asgeirsdottir

The Little Girl on the Ice Floe by Adelaide Bon

And on my Kindle,  Lisa Appignanesi’s minutely researched book on the history of women mental health, and male doctors –

Lisa Appignanesi. Mad, Bad and Sad: A History of Women and the Mind Doctors From 1800 to the Present. London: Virago P, 2008.

and Rebecca Solnit’s Men Explain Things to Me, a tract already passing into the realms of literary orthodoxy – if not mythology –  to which has wrongly been ascribed the coining of the term ‘mansplaining’.

Which is my favourite?  I loved Antony Beevor’s book about Crete – especially as I read it in Crete which is my favourite place on the planet.  But overall, it  has to be Ocean Vuong.  As a poetic and visionary recording of often traumatic memory,  it may be a long time before I read anything quite as beautifully shattering.

As for topics – courageous women – or rather women who find their power and courage even when they don’t know they have it –  is a dominant theme of the list above. Purnell, Perez, Asgeirsdottir,  Bon, Appignanesi and Solnit all write on this theme.

The elephant in everyone’s room at the moment is climate crisis which I am studiously avoiding because it’s too painful.  I suppose Bob Gilbert’s book is the closest I have come to that.  Macfarlane is still to be read as is global blogger and polymath, Maria Popova.

Finally, what am I hoping to get out of participating in non-fiction November?  I’ve already got a lot out of it because its made me look back again at all the fabulous books I’ve read, rather than just clock watching and worrying about the next one.  Also hoping to meet more wonderful book addicted bloggers.

2 responses to “Non-fiction November: Your Year in Non-fiction”