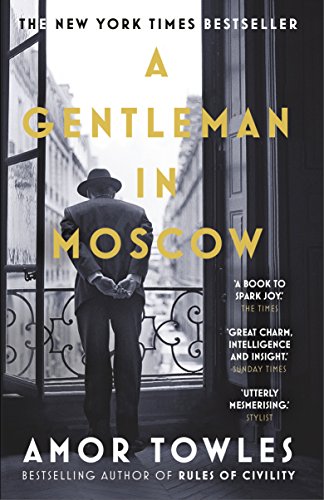 Set in the aftermath of the Russian Revolution and during the Stalin era, Count Rostov is an aristocrat who more by luck than judgement has managed to survive the revolution, being saved from execution but ordered by a tribunal to permanent house arrest inside the Hotel Metropol.

“And who knew,” says Rostov’s friend Mishka, a poet who would later be claimed along with millions others by the terror, “that the day you were sentenced to life inside a hotel was the day you became the luckiest man in Russia.”

His daughter is a pianist but inexplicably is reluctant to take up an offer to travel to Paris with the Moscow Youth orchestra.  The Count who has not left the Hotel Metropole (except once for a medical emergency) in over twenty years is at dinner trying to persuade Sofia to take up this wonderful opportunity.  How can she not wish to go?

“I fear I have done you a great disservice, “ he tells his daughter.   “From the time you were a child, I have lured you into a life that is principally circumscribed by the  four walls of this building…. .   But your mother was perfectly right.  One does not fulfil one’s potential by listening to Sheherezade in a gilded hall, or by reading the Odyssey in one’s den.”

As a philosophy this can’t be beaten.  Nor, as a literary character,

can the handsome, educated and aristocratic Count Rostov – with a talent for formal seating plans and a worthy but unfulfilled desire to read the essays of Montaigne – be beaten.   In the days when it would be taken for granted that barbers were artists and conversationalists; in the days when the Chassagne Montrachet could not be served at other than the exact temperature, we know that somewhere there would always be a Rostov.

Life in the Metropole – even under its oleaginous party functionary new manager – continues to have pre-revolutionary echoes because its principal character has pre-revolutionary echoes, as to his lifelong friends the maitre d’ of the famous Boyarsky restaurant and Emile the chef, wielding his chopper in order to enforce a particular point in the conversation.

Nevertheless,  a prison is a prison whether gilded or not.   There is a poignant reference to feeling Spring in the air on the one occasion he has to leave to take his daughter to hospital.  What must it be like to spend so many years of your life indoors?   Does a compelling narrative require the characters to be allowed to range far and wide?  Apparently not.      The Count is only able to traverse from bar to dining room to hall to rooms and back again (he does on one occasion make it to the roof)   yet his story  is highly readable.  He becomes resigned but not accepting of his situation – what else is available to him?   To be sure adventures seem to come to him, sometimes in a way that a less forgiving reader might question as likely.

This book is a complete joy.  I hear that Sir Kenneth Branagh is to play the part.   A more perfect piece of casting is hard to imagine.