It took me a while to work out what Pachinko was –some kind of gambling involving machines? Of course if I had taken the trouble to look it up I would have found that it’s an arcade game similar to pinball, thus making the book’s title a metaphor both for a means of earning a living (ie running the arcade) and the great pinball machine of life where we all think the chances of winning are as good as the chances of losing. But I was too busy reading to stop and go to Wikipedia so I got right through nearly to the end of the book before I worked it out. It made no difference to my enjoyment of the writing.

The story is of a family from Korea who suddenly find themselves living in Japan – or trying to – just before the outbreak of the second world war.   A cross-generational saga which starts in a poor boardinghouse in Busan, Korea, in 1910 and ends in Tokyo in 1989 in very different circumstances. 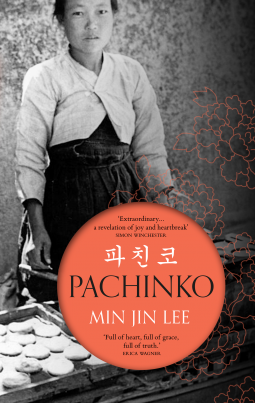 Left alone with her mother after her father’s death, Sunja has to work hard to help her mother run the boarding house but things go wrong (don’t they always) after she meets a man in that most romantic of all arenas, the fishmarket:

Her shopping route didn’t vary from what she had been taught by her mother and father: first, the fresh produce, next, the soup bones from the butcher, then a few items from the market ajummas squatting beside spice filled basins, deep rows of glittering cutlass fish or plump sea bream caught hours earlier – their wares arrayed attractively on turquoise and red waxed cloths spread on the ground.

Sunja of course meets many obstacles on this journey. As well as being Korean, she is (of course) female but yet needs to work. It is a substantial read in all respects, coming in just under 500 pages but I found myself reading quickly, compulsively even, in two days. Min Jin Lee’s great strength as an author is to produce sympathetic characters so that the reader really cares what happens to them.

One of the issues at the heart of the story is how Koreans were viewed at that time by some of the Japanese people with whom they were trying to rub along – which it is fair to say was not always with the greatest sympathy, facing as they did restricted employment opportunities and hostile attitudes. This is a story of overcoming those things or of trying to. It’s a story of sticking to your principles. Of making the best. Of battling on. It is a story which asks whether we can come through anything regardless of the cost, or whether sometimes the accounts just pile up too high.

If I have any criticism at all it is that some of the characters seem almost too upright and stoical – perhaps a little saintly even? The book asks (with great relevance to today’s precarious politics in the West) what it means to belong to one nation or race and whether that sense of belonging comes only from the outside, ie from other people’s perceptions of us. What lengths will we go to in order to fit a preconceived mould, and does it ever wholly work? Can we still lead lives of grace, regardless of how others behave towards us? If these questions on seem to border on the ethos of Christianity perhaps they do. Are the chances of winning as great as the chances of losing. Or has someone fixed the pinball machine?