“You can be lonely anywhere , but there is a particular flavor that comes from being lonely in a city” 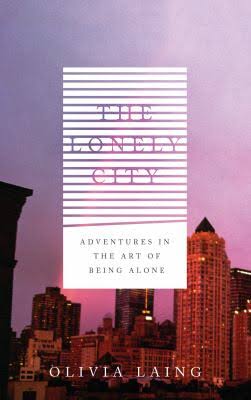 If this reads as an entrée into an examination of the work of American artist Edward Hopper (1882- 1967) – among other things, it is.    Looking at Hopper’s work it is hard to avoid a sympathetic response to the situation of his characters as people who are alone in their urban environments, with all the ensuing emotional cost that this involves. Although the artist himself did not like to admit to his paintings as studies of loneliness, Laing finds it hard to separate his work from this idea.

Laing also casts her compassionate eye over the life and work of Andy Warhol (1928-1987), David Wojnarowicz (1954-1992) and Henry Darger (1892-1973), the last to me completely unknown, but perhaps the most extreme in a literal realization of what it means for the personal of the artist to be physically and emotionally isolated, yet still create. Darger’s work was discovered posthumously writing and paintings of a Faustian world, containing scenes of both torment and paradise.

The essential isolation of the human condition! Considering there are so many of us – why is this?   As Laing points out, mere physical proximity is not enough to dispel these feelings, rather it exacerbates them, containing within itself the potential for voyeuristic opportunities to put the viewer in the situation of unauthorized observer of other lives, a situation which Hopper appears to explore in Night Windows.

Living in the country may sometimes be a lonely experience but surely it is harder to feel that sense of complete isolation when other beings are birds, insects, trees, grass. How do we know the pain of other lives? The difficulty … the joys? We don’t.   Those who are artists, painters, poets, musicians, writers of all ilk spend agonizing hours trying to find out. Or perhaps our lonely little planet spinning in its void is so much a part of us – as each of us is part of it – that it is inevitable we should share in the planetary sense of impending oblivion.  Is this what Plath meant when she wrote :

This is the light of the mind, cold and planetary
The trees of the mind are black. The light is blue.
The grasses unload their griefs on my feet as if I were God

(The Moon and the Yew Tree)

If the grasses grieve that we must grieve too. Humanity is not god but it has behaved as an irrational god achieving dominion over its environment then destroying it. What, faced with this relentless destruction, can an individual do? The answer lies in re-establishing broken connections – not in a caustic business sense of networking – but in a sense of identifying life as a shared process. Olivia Laing’s book sheds light on the artworks she travelled to the US to examine, but in the process she found out about herself and it is these insights that enable the reader to connect, as much as the lives and times of the artists she writes about.